The quote “Todos somos calaveras”,
meaning “We are all skeletons”,
exemplified the idea that lying
underneath all faults and
differences, everyone is the same
and has their own skeleton
underneath.

EduardoSanchez Calavera Collection
displays the emotional power and raw
energy of the “Day of the dead” by sharing
the romantic and contemporary nature of
Eduardo Sanchez Jewelry unique
Designs.

Día de los Muertos celebrations originated
in Mexico and is now celebrated all across
Latin America.

Sometimes mistakenly referred to as
“Mexican Halloween”, Día de los Muertos
can be traced back to around 3000 years
ago with the ancient Aztec people.

Eduardo Sanchez is dedicating this
time of the year to remember all of our
family and close friends with this
Limited Edition Necklace; which truly,
i s a celebretion of life. 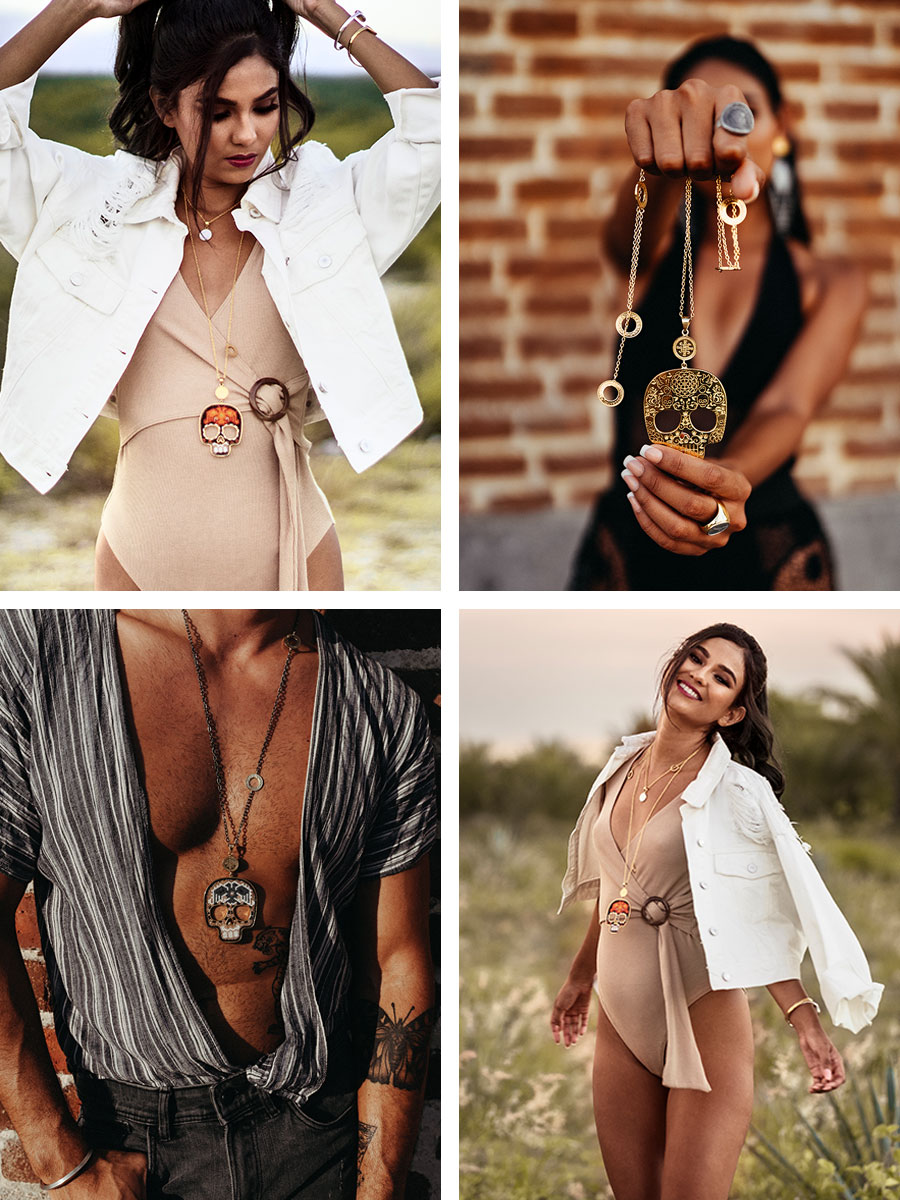 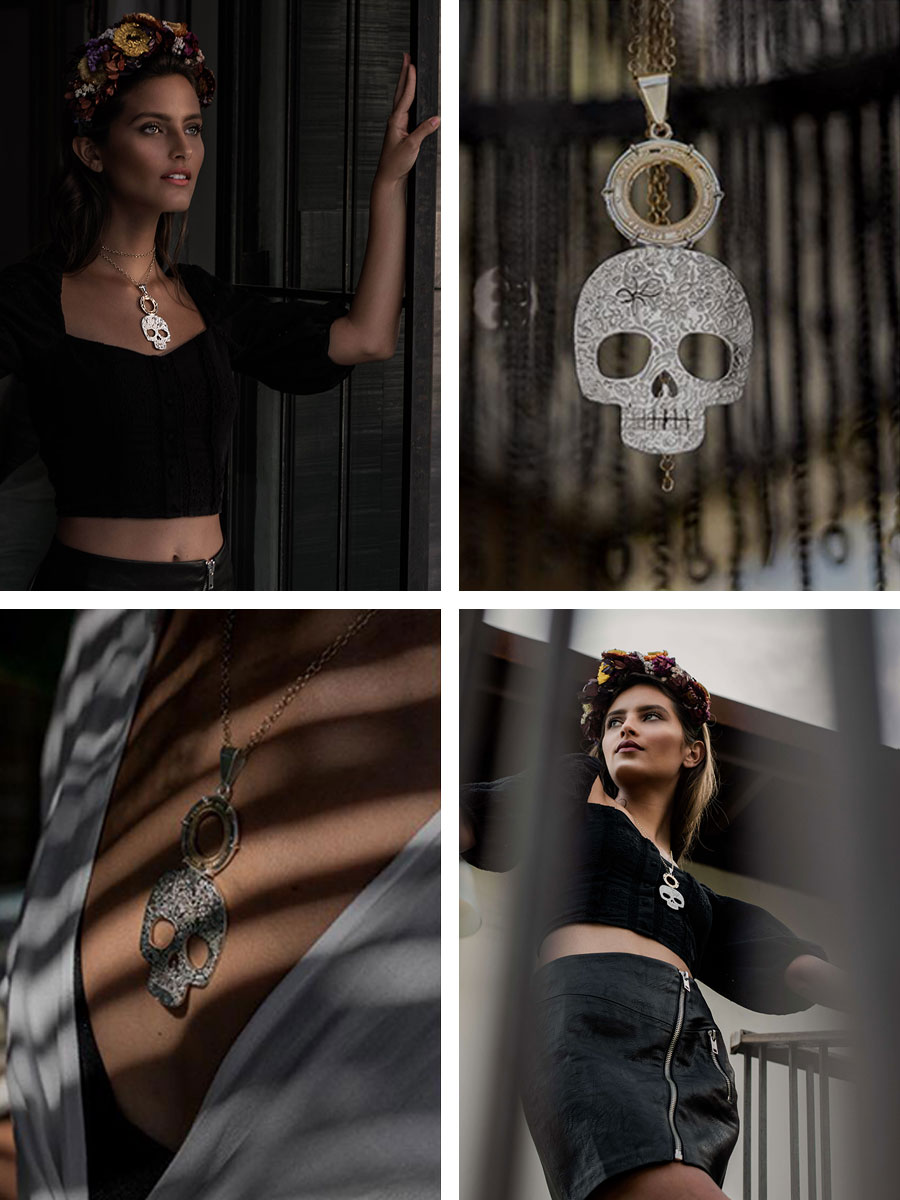 This beautiful edition is carefully hand-carved in fine silver with flowers details design along with ES signature silver coin dipped in 24k gold and chain, with a unique taggo closing system. 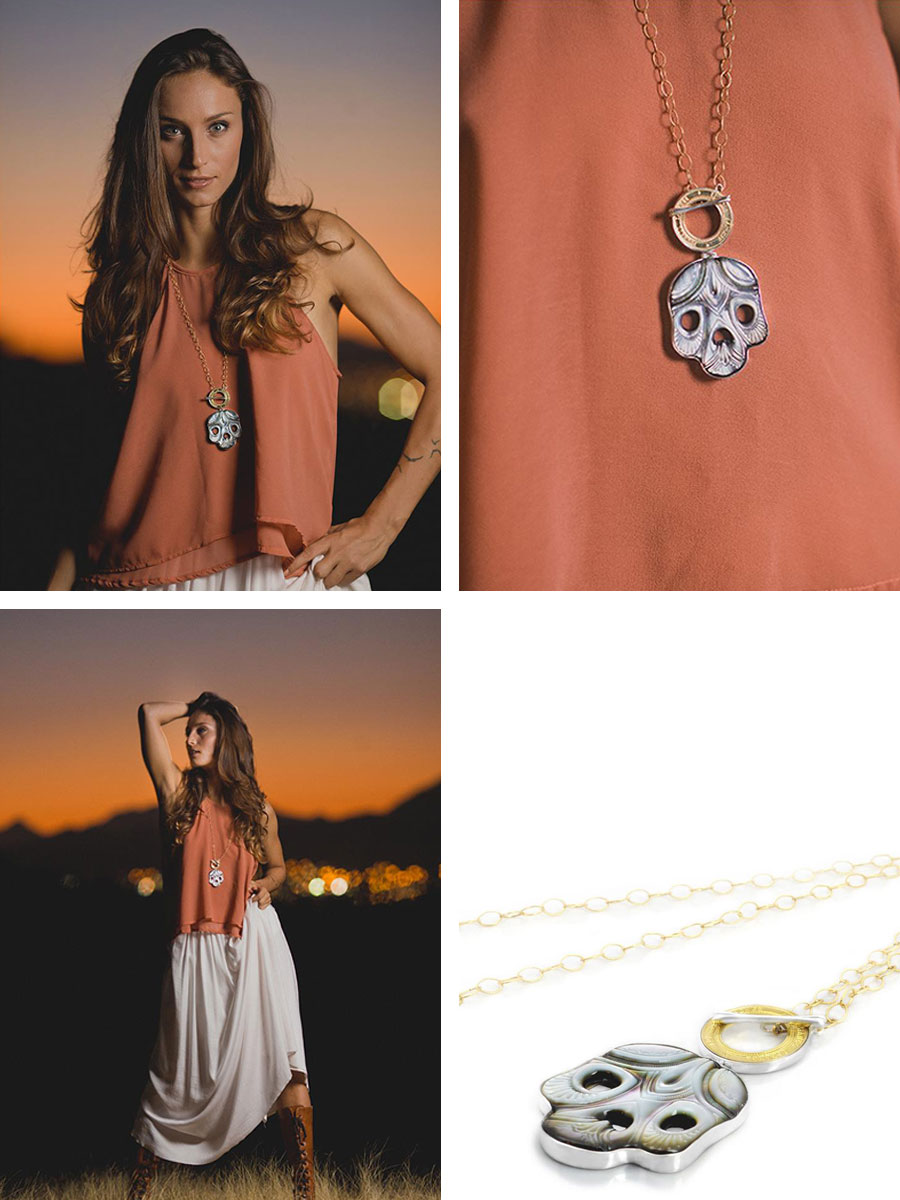 This limited edition collection was designed in association with re known Tahitian sculptor and artist Heremorana. With colors ranging from deep violet to bright green, the designers skillfully carved a fine piece of mother-of-pearl to showcase the colors of life in a typically Mexican symbol of death. The Calavera Necklace is a subtle reminder that what makes all things beautiful in life is that they die. Carpe Diem indeed.

Life is a journey and only you hold the KEY

Love is the Key
There’s something about the look of a single key charm hanging on a long delicate chain that we absolutely love.
Brightly shining ESJ Keys will be treasured forever.
A limited collection of 10 keys, each one unique.
Pure gold Mexican coin in the center of the key which is surrounded by precious stones: Sapphires, Rubies or Tanzanite and the Master Key With Diamonds.
ESJ Keys are radiant symbols of a great future. This amazing pendant with pure gold Mexican coin and precious stones exudes a dazzling sparkle.

This Collection, as the name implies, is where Eduardo Sanchez Jewelry began.

The coins are circles that represent cycles and for Eduardo the meaning of having a piece of jewelry with coins is also like a law of attraction, for abundance, and as in all ESJ collections, each coin hasa story behind it.

Based on Mexican coins, precious metals and ingenious designs that make this collection a reminderof the brand’s roots.

Connect with
the beauty
of Earth

The shades of the night sky

Inspired by the lost mayan civilization

Exotic and Bold, Zama Collection was inspired by the lost Mayan civilizations, its mysteries and richness. Each piece is beautifully handcrafted in our studio with the finest materials that Mexico has to offer and this is what makes each piece so special and one - of - a - kind THIS FEMENINE COLLECTION IS DESIGNED TO MAKE A STATEMENT FOR THE JUNGLE GODDESS Inspired by the magic of the old ruins of the Mayan city "Zama" Eduardo Sanchez create a collection that is modern and mesmerizing. This exotic collection features coins in a brand new and disguised fashion: The head of the quetzalcoatl presented in these pieces were used in old Mexican 5 pesos coin.